Four years ago, scientists across Brazil feared the worst when Jair Bolsonaro was elected as the country’s next president. Bolsonaro had promised, for instance, to pull Brazil out of the Paris climate accord, dismantle the environment ministry and reduce the extent of protected areas if he won. Although he didn’t fulfil some of those promises, the president has repeatedly clashed with Brazil’s scientific community and caused lasting damage, according to critics. He has, for example, fired government officials who disagreed with him on issues such as surging rates of deforestation and health measures to curb the COVID-19 pandemic, which has so far killed almost 700,000 people in Brazil.

Now, Bolsonaro is asking for a second term, and Brazilians will head to the polls next week to vote. In advance of the election, Nature looks at the impacts that Bolsonaro has had on science, health and the environment.

One of the current government’s biggest impacts has been on the environment. Data from Brazil’s National Institute for Space Research (INPE) show that deforestation in the Brazilian Amazon has surged since the start of 2019 — last year, it reached its highest level since 2008 (see ‘Deforestation surge’).

The trend started early in Bolsonaro’s administration. By mid-2019, INPE reported that deforestation had climbed sharply. Without evidence, the president accused the agency of falsifying the deforestation data and said it was trying to hurt the government. The physicist Ricardo Galvão, head of INPE at the time, stood up for the agency’s data and Bolsonaro fired him shortly after.

Even before Bolsonaro took office, he made his aims clear when he vowed to end what he called “an industry” of environmental fines in the country, and to dismantle the Ministry of Environment — his team’s idea was to disperse its responsibilities among other ministries.

Although Bolsonaro didn’t explicitly disband the ministry, his administration carried out a plan “to dismantle the environment ministry from within”, says Suely Araújo, a former president of the Brazilian Institute of Environment and Renewable Natural Resources (IBAMA), the agency responsible for monitoring and fining breaches of Brazil’s environmental law.

The president made good on his promise regarding fines. In January, Bolsonaro celebrated an 80% reduction in IBAMA fines on rural properties.

“The result is an explosion in deforestation rates, wildcat mining and invasion of public lands, followed by great social conflict,” says Araújo, who is now a public-policy specialist at the Climate Observatory, a coalition of organizations focused on climate change and the environment. 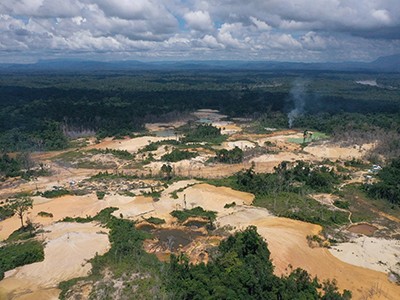 According to a report by the Hutukara Yanomami Association, an advocacy organization that represents the Yanomami people of Brazil, illegal mining increased by 46% in the Yanomami Indigenous territory in Roraima state in 2021, compared with the previous year. The federal prosecutor’s office in Roraima asked a federal court to force the national government to take action against the mining operations, which threaten Indigenous people in the region and have created what the prosecutor’s office has called a ‘humanitarian crisis’.

Critics of the Bolsonaro government say its lax enforcement of environmental laws has also led to a vast increase in forest fires, often sparked by people clearing land for agriculture. By August 2019, just a few months into Bolsonaro’s presidency, INPE reported that the number of fires had surged by more than 80% compared with the previous year. Bolsonaro suggested that environmentalists might have set the fires, although local media reported that agricultural producers who coordinated the burning felt that their actions were supported by the president.

“In terms of environmental policy, the deconstruction of governance and surveillance processes will demand time and resources to reconstruct,” says Mercedes Bustamante, an ecosystems ecologist at the University of Brasília and a report author for the Intergovernmental Panel on Climate Change. “Ecosystems have been destroyed as a result of such deconstruction, and it can result in irreparable damage.”

The office of President Bolsonaro did not respond to Nature’s requests for comment.

The government has also made substantial cuts to scientific research. In 2021, the total budget approved for science and technology in the science ministry was effectively the lowest in at least two decades, according to numbers compiled by the Brazilian Society for the Advancement of Science (SBPC) in São Paulo (see ‘Over the funding cliff’).

The Ministry of Science, Technology and Innovation funds agencies such as INPE and the National Council for Scientific and Technological Development (CNPq), which provides grants for research, equipment and materials. Another important source of support for science comes from the Ministry of Education. Grants from a foundation called the Coordination for the Improvement of Higher Education Personnel (CAPES) sponsor training for new researchers.

According to SBPC president Renato Janine Ribeiro, that’s not the only problem. “Besides budget cuts, there’s an ongoing campaign to try and undermine the morale of public higher education, culture and public health,” says Ribeiro, who is a former Brazilian minister of education.

Bolsonaro has criticized Brazilian universities and “propagated lies such as that public universities are places for sex, disorder and confusion”, says Ribeiro. In 2019, Bolsonaro attacked their quality and said most students there “do everything but study”.

Public universities are struggling to make ends meet. Some are likely to run out of funds to pay bills and personnel this month or next, “which means they might be forced to close their doors, even if temporarily”, says Ribeiro.

One of the big challenges Brazil will face in the next few years is the aftermath of the COVID-19 pandemic, says Isabela Soares Santos, a health-policy researcher at Brazil’s National School of Public Health in the Oswaldo Cruz Foundation in Rio de Janeiro.

Many health experts say that Bolsonaro and his policies greatly exacerbated the toll that COVID-19 took on Brazil. As the coronavirus SARS-CoV-2 spread around the world in early 2020, Bolsonaro dismissed its dangers, calling it a “little flu” and a “fantasy”. He promoted herd immunity by natural infection and touted the use of treatments shown to be ineffective against COVID-19, such as hydroxychloroquine and ivermectin. He also ignored scientific advice from researchers and public-health officials, and fired health minister Luiz Henrique Mandetta in April 2020 because he advocated measures such as physical distancing to slow the virus’s spread. 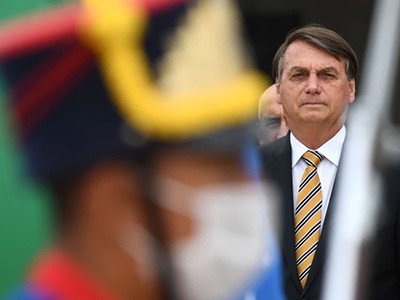 Among other actions, in March 2020 Bolsonaro signed a decree that included churches and lottery retailers as essential services that should not be interrupted by restrictions on operations, which were set mostly at the state and city levels.

Santos says President Bolsonaro’s support for ineffective solutions and his dismissal of protective measures paved the way for the high number of COVID-19 deaths in Brazil — more than 685,000 so far. Brazil had one of the highest numbers of deaths relative to the size of its population.

But the issue goes deeper. “The virus worsens already existing chronic illnesses and creates other conditions, such as long COVID,” she says. “We are all paying this bill and this is something the next government will have to tackle head-on. It will take years to reconstruct what has been damaged,” says Santos.